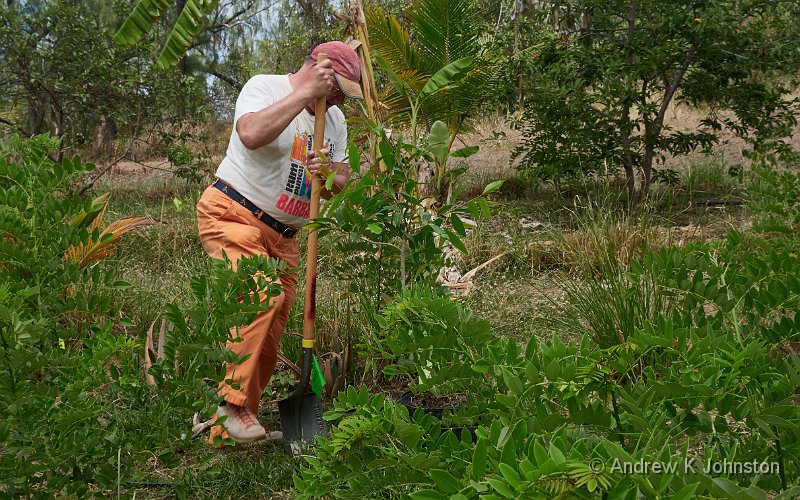 With timing more serendipitous than deliberate I spent the eve of Earth Day at one of Barbados’ newest features – the nature reserve being created as the old sand quarry at Walkers in St. Andrews is being wound down. This was fortuitous in more ways than one: I’m always keen to see new attractions when we visit Barbados, but I can now claim something of a professional interest as well. My latest engagement with Aviva centres on their ambition to become the leading financial services organisation in respect of sustainability, and it was good to go hands on with a small but very practical sustainability project.

The site is in a corner of Barbados which doesn’t support much agriculture, and has since 2016 been designated as a National Park (along with most of Barbados’ East and North Coasts). When I’ve previously looked down on the area from the surrounding hills, or during a wonderful microlight flight in 2019, it’s always seemed somewhat ugly and barren, so the idea of turning it back into a semi-wild reserve seems perfect. 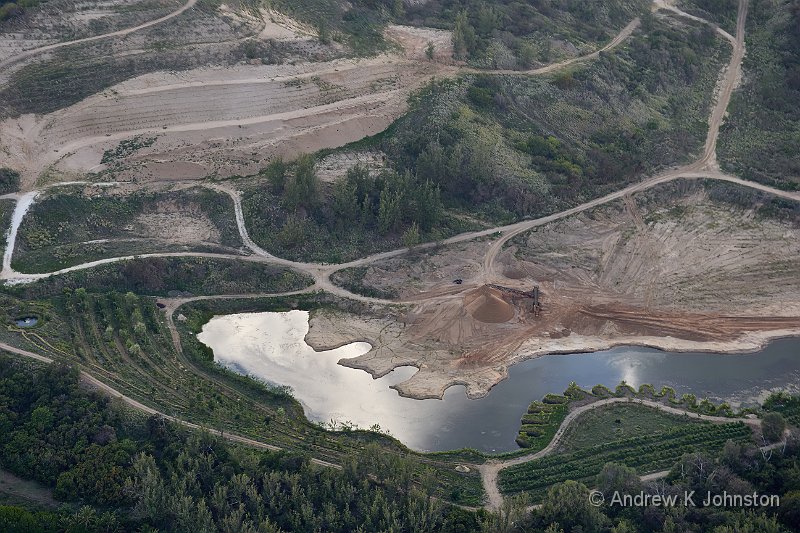 There are some challenges. Although Barbados is green everywhere you look, and I’m writing this in the middle of a truly Biblical downpour, the reserve has to be designed on a "water deprived" basis, as it has to cope with both protracted dry periods, and then heavy rains most of which, unless trapped, will just drain straight to the sea. That affects both the choice of plants, which have to be tolerant to salt, heavy rainfall and dry periods, and the landscaping, designed with multiple traps to catch and slow rainwater for irrigation.

Much of Barbados’ agriculture is mono-cultural, especially the large areas dedicated to sugar cane, with all the associated physical and economic risks. Planting at the reserve is by contrast a deliberate polyculture, with multiple different species deliberately alternated. It’s a good example of taking some short-term pain (e.g. more tricky harvesting of the fruit) for longer-term benefits.

They also have to manage the endemic vegetation and wildlife, which includes a number of invasive species, most noticeably the weed which fills the freshwater ponds. Barbados doesn’t have a great record on invasive species management. One of the creatures which crossed our path on the tour was a mongoose – now a significant part of the Barbados fauna, but originally introduced to try and keep down the (also introduced) rat population. The problem is that rats are nocturnal and mongeese are diurnal, so never the twain meet…

Education is a major part of the reserve’s mission. Some of the biggest challenges relate to the behaviour of local people and visitors, and will only be addressed by cultural change driven by that education. Littering has long been an issue across Barbados, and during heavy rains the reserve gets a graphic measure of this as anything deposited in the local waterways is washed down through its rivers and ponds. Plastic bottles are a constant nightmare, but my guide Meike has even seen a dumped fridge. Educational and information campaigns are starting to have an effect, but without a recycling culture (and with few local recycling facilities) it’s going to be a slow process.

Other behavioural challenges include persuading local farmers to use fewer chemicals, and persuading the owners of ATVs and dirt bikes not to use them on the fragile, protected dunes on the coastal side of the reserve.

One of the most graphic examples of where behavioural change could help is the "harvesting" of coconuts. Wherever there’s a coconut palm tree there will be coconuts, which will just rot if they fall on the ground, and there will usually be someone who wants to harvest them. They are definitely a renewable natural resource. So far so good. However what tends to happen with the vast majority on Barbados is the coconut is tapped for the coconut water, and then the rest of the nut, including the flesh/cream and copra, is just left to rot almost where it fell. There’s no attempt to extract and use what must potentially be a valuable food resource (surely at least for animal feed?) On top of that many of the illicit "harvesters" use spiked shoes to climb the trees, with a devastating effect on the tree bark. One can’t help but think that there has to be a better, longer-term approach.

As part of your visit you can plant a tree, which is a great opportunity to both make a practical contribution and offset the carbon emissions of your flight. I was given a Jamun tree to plant. These are fast-growing trees which produce both edible fruit and eventually useful water-resistant timber. As they can grow to over 10m tall one tree should comfortably offset the 2 tonnes or so of CO2 generated for a return Economy flight across the Atlantic, but it puts it in perspective that for true offsetting every passenger should plant such a tree on every trip, and that’s certainly not happening.

Even one tree helps the staff with their current project. Apparently the Jamun fruit make excellent wine, and the bee colony is now producing enough honey that they’ve started on making mead. That’s one Barbados tradition which doesn’t need to change, growing stuff and turning it into booze!

As with any post-industrial change there are both positive and negative impacts. Barbados will no longer be self-sufficient in sand for construction, and those who quarried and transported it will have to find alternative work, replaced by biologist/farmers, who also have to do a turn as tour guides and educators. It will be interesting to watch how things progress, but I hope that Walkers Reserve will succeed as a considered greening of an old industrial scar. It’s well worth a visit, and I hope its educational mission succeeds in building longer-term, more environmentally-focused thinking on Barbados and elsewhere.

View featured image in Album
Posted in Barbados, Thoughts on the World, Travel | Leave a comment

Is this the perfect travel tripod for the man who doesn’t actually like carrying a tripod? Legs from a 45 year old Slik 500g. New head from Manfrotto – lightest in the range. I did have to cut off the Continue reading → 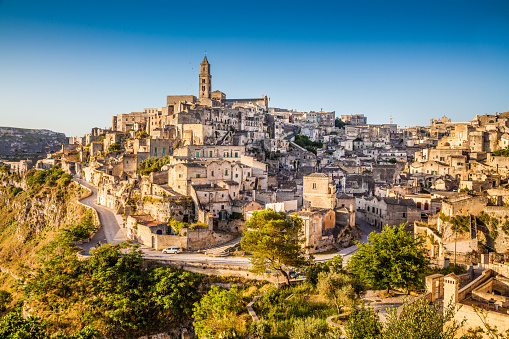 Here’s a heretical proposition: Quantum of B**locks is clearly the worst of all the “real” Bond films, but is No Time To Die the second worst? The release of a new Bond film is always accompanied by almost hagiographic sycophancy, Continue reading → 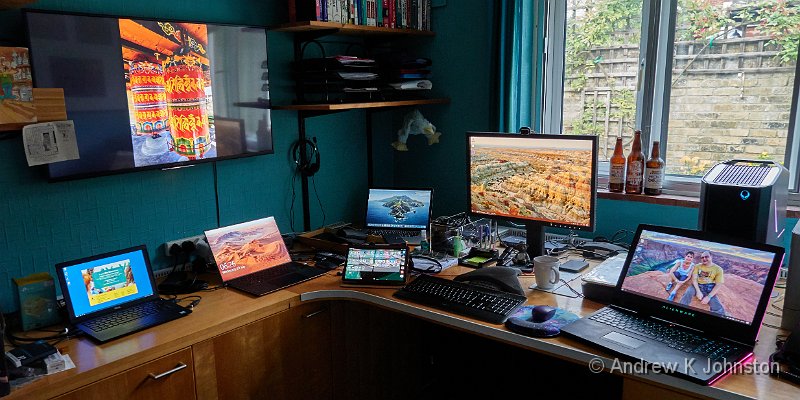 Is this what they mean by “too much screen time”? Continue reading →

"This is Bloody Dangerous!" 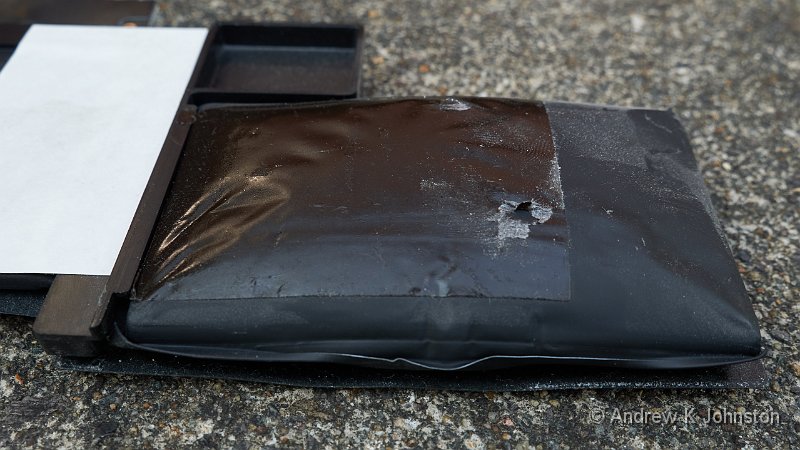 More MacBook battery woes – this time it’s serious. The title is a quote from arguably the greatest of Hollywood Musicals, Paint Your Wagon. The words are uttered by Mad Jack Duncan, a gold miner engaged in digging a shallow Continue reading →

A study in UX atrocity – the Mercedes Benz COMAND SatNav I drive a 2011 Mercedes. Like many of its brethren, most of the vehicle is a demonstration of engineering excellence: smooth, efficient, safe and smart (in both senses of Continue reading →

Cool Cab – Hold It Right There! 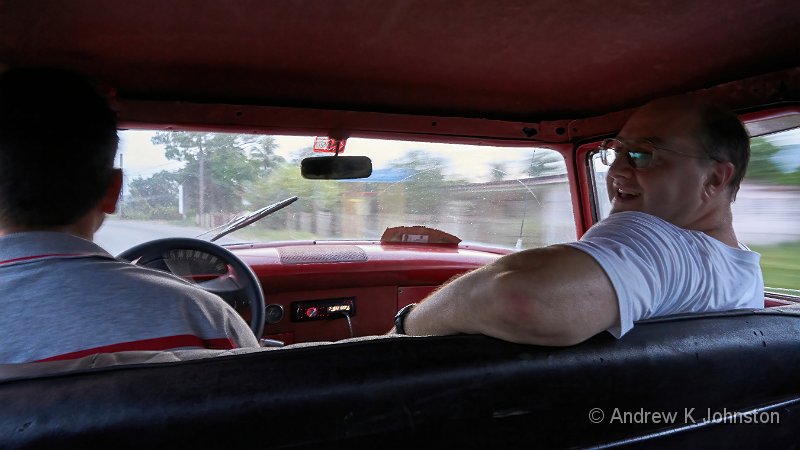 I continue to be blown away by what modern AI-powered processing tools can do with early digital photos. This photo was taken from the back of a very jittery 1950s Ford Consul, by someone unfamiliar with my camera, in fading Continue reading →

Disasters and Dystopias: Where Are We Now?

There’s a darkly humorous meme doing the rounds: It makes you chuckle, but it’s wrong. Firstly, I’m not sure even the most disheartened would actually claim to be living the events of The Matrix. Of course, there’s always the possibility Continue reading →

When I first made the transition to digital photography, I got into several forms of multi-shot photography, techniques where you take two or more independent exposures and combine them to get a result not possible with a single frame. As Continue reading →

Thursday, January 7, 2021 in Photography, Thoughts on the World 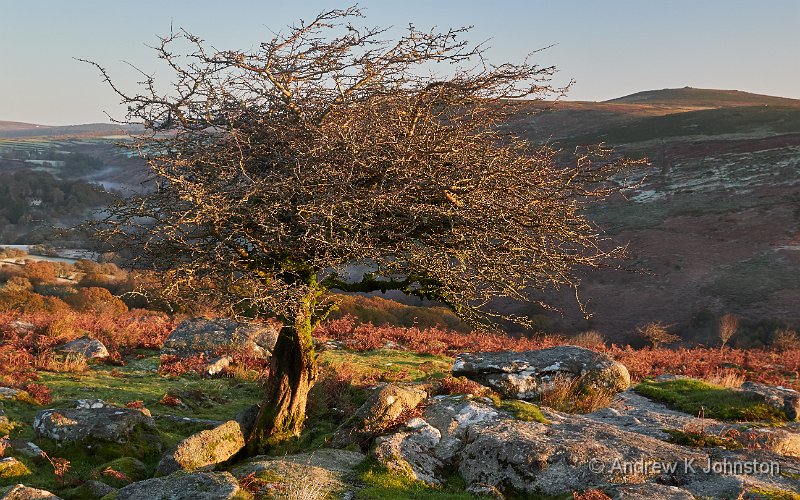 We awoke on day 2 of the Dartmoor trip to a changed world at multiple levels: news from the US election of Trump’s likely demise, and much crisper, drier weather over Dartmoor. Lee decided to return to Combestone Tor for Continue reading →

Tuesday, November 17, 2020 in Photography, Thoughts on the World, Travel

After the cancellation of my Patagonia trip in March at a few days notice, and our short trip to France at 12 hours notice in July I was really hoping I could make my final attempt of the year work. Continue reading →

Tuesday, November 10, 2020 in Photography, Thoughts on the World, Travel 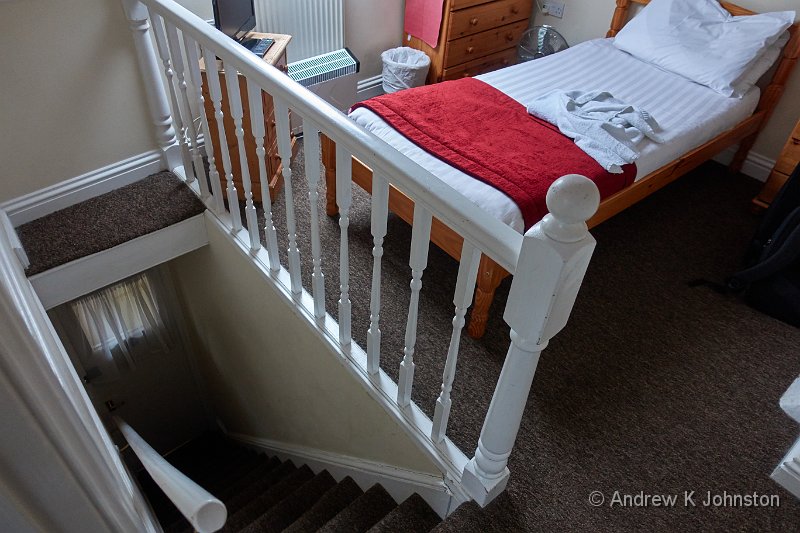 A humble (or not so humble) hotel room may succeed in delivering a satisfactory service to the user, but it may also fail dramatically to do so. These failures suggest that the “designer” either hasn’t thought about the user at Continue reading →

Saturday, September 19, 2020 in Humour, Thoughts on the World, Travel