Disasters and Dystopias: Where Are We Now? 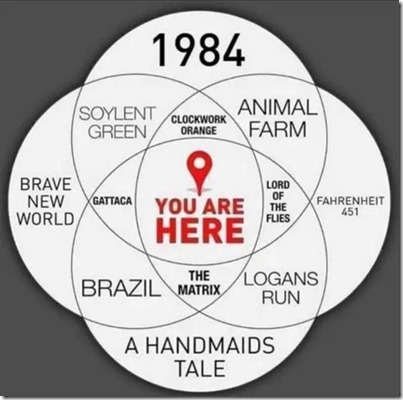 It makes you chuckle, but it’s wrong. Firstly, I’m not sure even the most disheartened would actually claim to be living the events of The Matrix. Of course, there’s always the possibility that the machines have plugged us all into an artificial reality in order to harvest us as batteries, but [a] I’m not sure that’s the most efficient way of powering themselves and [b] don’t you think they would have chosen a more cheerful script to keep the batteries happy? However more importantly, there are some very real aspects of our current situation which have been foreseen on film, and they’re missing from the list. The list above are all great books or films, but they are a bit out of date. We need a new version.

So what version of the picture actually reflects where we are now? Which disaster and dystopian movies and TV shows have portrayed or predicted key elements of our current predicament?

Contagion. Tick, tick, tick. Zoonotic pandemic starts with bats interacting with food animals in China, and spreads quickly through international travel. Tick. R0 is about 3. Tick. Significant sectors of the world economy shut down. Tick.  Healthcare systems struggle to cope, but the professionals keep going till they drop. Tick. Part way through new variants arise which are even more transmissible. Tick! Well-known figures publicise quack “cures” and sow discord, but meanwhile hard-working scientists develop a real vaccine. Tick. OK, it’s a flu not a coronavirus, it’s more lethal, it affects all demographics roughly equally, and the US is portrayed as a willing participant in the WHO, but otherwise it’s scarily accurate. Also, by and large America hasn’t yet suffered societal breakdown as a result of Covid, but the article is yet young…

On a more positive note since this isn’t the Zombie apocalypse, and we haven’t (yet) taken to bombing infected towns, Outbreak and World War Z are off the list.

While we’re thinking about heath care provision, there is a great action/conspiracy film about health care inequality: Elysium. We haven’t quite got to the stage where the rich have to fly their Bugatti air-cars up to an orbiting hospital to get the care their money deserves, but many of the trends are recognisable. Tick.

We are of course living through, and causing, another albeit slow-moving disaster: climate change and the Anthropocene mass extinction. You’d think that this would be a rich seam for film-makers to mine, but so far that hasn’t really been the case, although there are a few candidates. Medicine Man brilliantly portrays the wanton destruction of the Amazon and its biodiversity, and the effective war on its indigenous people. There’s the added poignancy that we know John McTiernan and the producers wanted to film it where he’d shot Predator, 5 years earlier, but that patch of rainforest had already been cleared. Tick. The Day After Tomorrow captures the causes and the political inertia we’re seeing, but so far it looks like the outcome will be more like the hot, dry world of Mad Max. There were a couple of decent TV Movies in the early noughties about climate-change driven extreme storms (Category 6: Day of Destruction and the rather more bonkers Category 7: The End of the World), but where are the films about massive forest fires, habitat loss, desertification and rising sea levels?

One related theme which has been well served is the risks around toxic waste, and the extreme corruption related to it. In my DVD collection there’s Fire Down Below, Sahara and Transporter 3, and that’s just scratching the surface. Even in The Dukes of Hazzard Boss Hogg’s skulduggery is in aid of a plot to strip-mine the titular county! I’ll take Fire Down Below as representative of the genre.

Set aside such wanton callous indifference, and deliberate acts of villany or terrorism, many real and fictional disasters are caused by bosses ignoring warning signs in favour of political or commercial expediency. In the “true life disaster” genre we have real examples such as Chernobyl and Deepwater Horizon. These are all brilliant, but if we’re sticking to fictional portrayals of current or near future risks they are probably excluded. While we haven’t yet got to the point where people are being eaten by theme park dinosaurs, Jurassic Park has this as a major theme, as does Rise of the Planet of the Apes. The latter also includes a major pandemic and the consequences of our mistreatment of other sentient species, so it gets a tick.

Thinking about theme parks, we can probably ignore Westworld for now, but Skyfire gets an honourable mention as we have, sadly, seen tourists killed while visiting an active volcano which erupted at just the wrong time. However I’ve excluded such as The Wave and Supervolcano which portray natural disasters which “will happen, we just don’t know when”, based on known science, but are not high on our current worry list.

Turning to the human condition, which is really the focus of the diagram above, which films most accurately capture current threats and trends? The new series based on Brave New World doesn’t really, although the concept of tourism to view poor people does ring a little true. However the previous film version of the story, Demolition Man is spot-on to a number of aspects of modern society, and a remarkable piece of futurology (detailed review here). Tick.

Minority Report scores on a several points. The police are using a AI and data mining (albeit with a group of prescient individuals) to try to predict and prevent crimes. People are tracked, surveilled and recognised wherever they go and then subject to a barrage of tailored advertising. We don’t yet have ubiquitous holograms, but otherwise many of the interactions look familiar. Tick. Surrogates accurately captures what may happen to humankind if we forgo direct physical interaction in place of the virtual, even if we don’t yet have the physical avatars it portrays. Tick.

AI is becoming a threat in its own right. Hopefully we’re still some way off the worlds of Terminator and Robocop, but we are developing killing machines with increasing remote and autonomous capabilities. We also run the risk of our own data being used against us. Let’s include Terminator Genisys, which covers both themes, and Eye in the Sky which deals with the moral and legal issues. After that you may be ready for some light relief: my favourite depiction of rampant AI, in a world not very far from our own, is the hilarious X-Files episode Rm9sbG93ZXJz. The challenges of being an analogue player in a digital world are the central theme of Johnny English Strikes Again, or the alternative version, Skyfall.

I’m not aware of a mainstream film dealing with the “post truth” world in which objective reporting is subservient to self-selected news sources supporting the rise of conspiracies and the extreme right, but it was handled well in the penultimate series of Homeland. Homeland also deals with other major concerns, including Islamic terrorism and the uncomfortable global interactions around it, and what happens when the upper layers of government cannot be trusted. Tick, even if it stops short of a right-wing mob storming the Capitol in an attempted putsch. Perhaps there is still a place for 1984 or Farenheit 451 in our list.

Let’s talk about the end of Trump, shall we? Personally I’d love to see El Presidente being hit by a meteorite or devoured by a velociraptor, but we don’t always get what we want. However there is a film which portrays the last days of an unstable tyrant unable to accept defeat, and blaming everyone but himself. Downfall. Tick. The US version of House of Cards depicted a US president wilfully corrupting the electoral system to cling to power, but eventually having to give way. It’s not quite right, as President Underwood is much cleverer, a skilful operator rather than a populist narcissist, and actually wants to do some good with his power, but it’s close enough. Tick.

So here’s my assessment of how our current state relates to all these disasters and dystopias:

Is there any good news? Well at least we haven’t included Armageddon,Independence Day or Supernova. We can control or prevent all the ills above, although whether we have the will to do so is debateable, and time’s running out on climate change and deforestation, to the point where things may already be destined to get much worse before they get better.