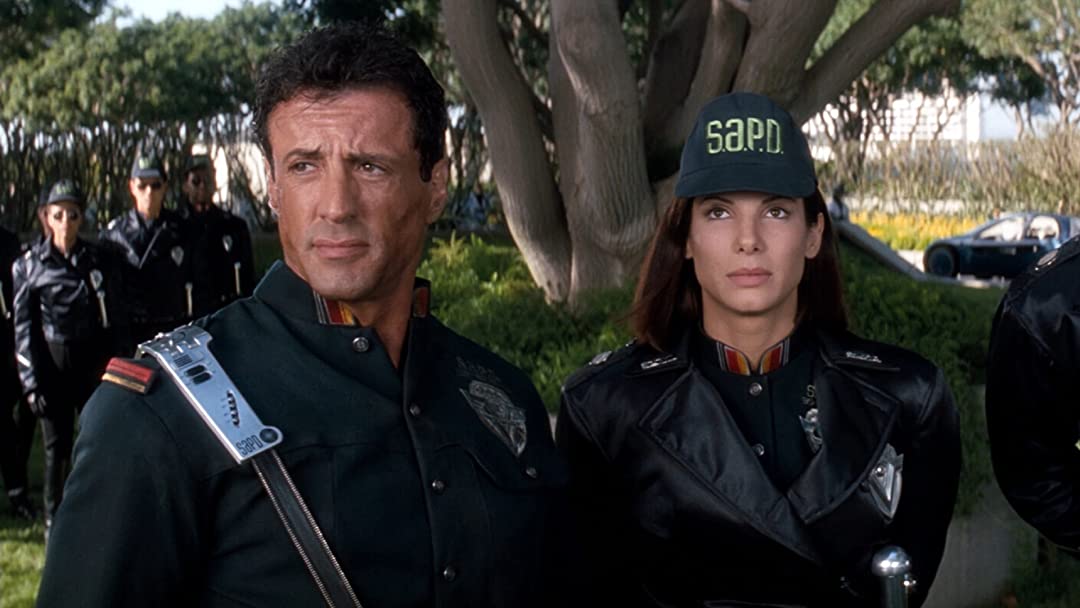 A great piece of futurology, remarkably prescient for this year

The other night we re-watched the highly entertaining Demolition Man, starring Sylvester Stallone, Sandra Bullock and Wesley Snipes (and let’s not forget Sir Nigel Hawthorne, who famously did it mainly to build enough of a Hollywood profile that they’d allow him to play the lead in The Madness of King George).

For a 27 year old film it stands up well: a sparkling, hilarious script based (very loosely) on Brave New World, strong if tongue in cheek performances by the leads, great action scenes. A few of the effects are a bit crude, but that’s not a major criticism. You do wonder if they toyed with the idea of doing it straight, but it works as an action comedy, while Huxley’s key themes about human nature and the dangers of excessive control still come through just as strongly.

However what made me want to write about it is how remarkably it stands up as a piece of futurology. This is a 1993 film set mainly in 2032. That date was deliberately a "long way in the future" but is now much closer to us than the film’s origin. In addition we’re currently undergoing an event, with the coronavirus, which is redefining many of our norms, and it’s fascinating how well some changes were predicted. In many ways, we’ve reached a point not far from what is portrayed.

Inevitably perhaps, the computers actually look a bit crude. I’ve always said that 25 years is the time it takes for the computers in any given Star Trek to look outdated: we’ve passed that age for this film, and it’s creators weren’t trying to predict the far future. They did get the level of voice control about right for where we are now, and, writing when we were slowly adopting Windows 3 and the web had a handful of sites, they correctly predicted the connected information world we take for granted. They missed out on the concept of mobile devices, and thankfully we don’t have devices handing out fines for profanity whenever we swear, although it might be fun and fairly straightforward to program Alexa to do so.

The film correctly predicts the demise of cash in favour of computerised money and contactless payments, and the ability to track the movements of individuals, but without portable/wearable computers these capabilities are provided by small embedded chips. We haven’t quite reached that level of integration, but mainly for moral rather than technical reasons: we have all the components. In a world where our phones will now continually log and trace our physical contacts to fight Covid-19, we’re scarily close.

Two other regular activities are contactless in the film: personal greetings and sex. The former is now rapidly becoming so in real life, again accelerated by the coronavirus, and the Demolition Man circular wave is a good option. The latter is not yet, but the artificial insemination process described for procreation is a pretty accurate reality for special cases.

The governor’s council meets by teleconference, albeit with large physical avatars in place of chairs in the council room. With the British government currently operating largely via Zoom, that’s spot on.

With one delightful exception the cars are all electric and self-driving but with a manual option. That’s well on the way, predicted for the middle of this decade. The cop cars have the ability to re-inflate tyres after taking a bullet, but instead we have an equivalent run flat capability and the ability to fill a punctured tyre with foam instead of changing a wheel. Tick. However the "secure foam" which fills the whole car after a major accident looks a bit final, and not an obvious improvement on airbags.

We see a small vehicle, possibly autonomous, being prepared to make a delivery from the restaurant. Online shopping and home delivery for both groceries and cooked food were already a major feature of many societies, but they have become the backbone of many lockdowns, with suppliers desperately seeking efficiencies. In Britain we now have drone deliveries of medical supplies and autonomous home deliveries will surely arrive.

Even some things meant as a joke are closer than the writers imagined. Radio stations or restaurant pianists dedicated to old commercial jingles are laughable, but we live in a world where Ridley Scott’s advert for Hovis (a type of bread in 1970s Britain) has nearly 1M views on YouTube, has a Wikipedia page and is still regularly satirised nearly 50 years on. Other British favourites like the Tetley Tea Folk, the PG Tips chimps and the Smash robots also get regular replays, and I’m sure non-British readers can find their own equivalents.

Another joke more nearly came true than the writers could ever have expected. Stallone makes great fun of a mention of the Schwarzenegger Presidential Library, but we know that Arnie did serve eight fairly successful years as Governor of California, and there was an (unsuccessful) attempt to change the rules to allow him a presidential run.

One thing which has changed less than predicted is language. A lot of fun is made of Bullock persistently misusing 90s expressions such as "shove it" and "blow him away", but they still work for me, and I suspect most will survive the remaining 12 years.

Several years after seeing the film I attended a seminar on electronic document management, at which one lecturer used the memorable phrase "a paperless office is as likely as a paperless toilet". He was wrong. Many offices were already on the way to being largely paperless even before the pandemic, and the increase in home working has only accelerated that. While we haven’t yet adopted the paperless toilet in the West, I have used one designed for Asian visitors which offered functions not unlike the three seashells of the film, with an even scarier control panel. The only paper we see in the film is the annoying receipts for the profanity fines. Like with our paper receipts for contactless payments these are largely just a nuisance, until Stallone finds a use for them to resolve his confusion with the toilet.

Why are the predictions so accurate? One driver is the timescale: trying to portray a period a few decades in the future means you can assume a lot of technical advance, but not enough to make the technology look like magic (i.e. not invoking Clarke’s Third Law). The writers obviously thought about feasible projections from 1990s technology, and avoided anything which would breach known physical capabilities – there are no hoverboards, because we don’t yet have the physics to create them, but it was a reasonable bet that computers should get complex enough to drive a car, with human backup. In his book The Road Ahead, written in 1996, Bill Gates states that we consistently overestimate what we can develop in 2 years, and consistently underestimate what we can achieve in 10, largely because we just aren’t very good at understanding compound or exponential change. Demolition Man benefits from this: it probably underestimates the reality of 39 years on from its release, but at the 27 year mark the technology looks like a good mixture of the established and the feasible.

However there are also warnings, particularly relevant at the current time. Perhaps Demolition Man‘s greatest prediction, albeit not yet realised, regards the state of society.

As in Huxley’s original book, in Demolition Man humanity has survived a disaster and built a safer, more ordered society, but at the cost of many of the personal freedoms which make us truly human and drive our advance. Anything enjoyable but even vaguely bad for you, from alcohol to red meat, is banned. Those unwilling to accept the restraints live in poverty, invisible in the margins.There is no violent crime and no firearms apart from a few in a museum. Life is tranquil, but eviscerated, and completely unprepared for individuals, good and bad, who operate outside accepted norms.

While that doesn’t yet describe the society of 2020, there is a risk that in response to the pandemic we trade away hard-won freedoms, and true democracy, already under threat from anti-democratic forces, is eroded past a point of no easy return.

It’s a good time to watch this film. Laugh at the jokes. Enjoy the action. Marvel at the technical predictions. But take away a salutary reminder that we need to protect freedom and democracy not only from stupid populists, but also from those who quietly say "it’s safer, and for your own good".

View featured image in Album
Posted on 23 May 2020 by Andrew - Please share: