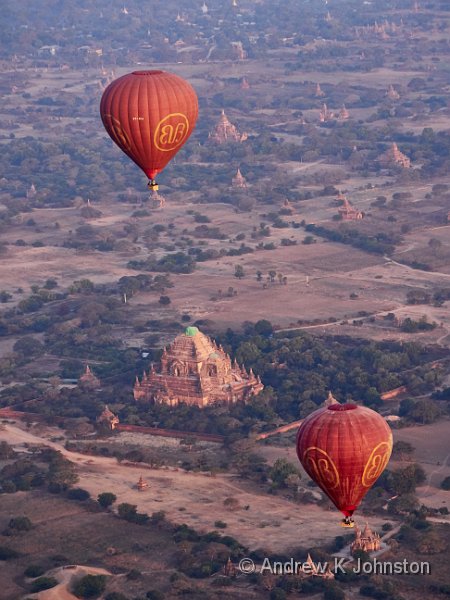 There’s a pattern starting to emerge for this trip: late meals, short sleeps, and then amazing visual experiences which make it all worthwhile. After a somewhat slow dinner last night and a very early alarm this morning I woke with a bit of trepidation, but I shouldn’t have worried. This was going to be a hard day to top.

The reason for this morning’s early start was a balloon flight over Bagan. This is an area of a few tens of square miles with roughly 4,000 ancient temples and pagodas, many of which date back to the 11th Century AD, although some are later. Most are in very good repair, although some have been clumsily restored in recent years, and ironically it was those which were badly damaged in an earthquake last year – the older unrestored ones weathered the ‘quake without problems. The balloon flight drifts gently over the area, allowing you a unique bird’s eye view of the temples and the landscape, juxtaposed with the other balloons in the air at the same time.

This was my fourth balloon flight, and quite possibly the best yet, even given that the last one was a mass ascent at the Albuquerque Balloon Fiesta in 2012, itself a magical experience for different reasons. Our flight today lasted over an hour, and included both high vantage points, but also drifting over the fields at a height where we could have picked some of the produce. The air was a bit hazy at first, but as the sun came up the contrast improved and I think I have some magical shots. 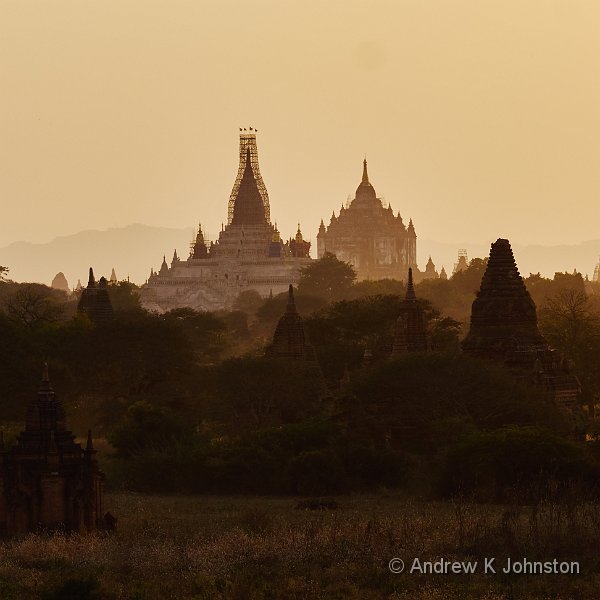 We had two breakfasts: a glass of champagne at the landing site, then back to the hotel for some more traditional fayre. After that we were out again, to visit one of the temples. I had misunderstood the instructions, and didn’t take my tripod, which was a bit of a challenge given that we were photographing inside by available light… However necessity is the mother of invention and I got some unique shots using the altar and my camera bag as a base, using the camera’s timer to fire the shutter without any shake. I’m very pleased with the results.

After lunch we had a couple of hours to ourselves. I spent mine by the pool, drinking what has to be one of the best pina coladas I have drunk in recent years. In the Caribbean they have taking to making such drinks with a pre-made mix which doesn’t taste of much. In Bagan they had clearly liquidised some real pineapple chunks, and the results where excellent.

4pm rolled through, and we set off to a "mystery event". Our Burmese guide, Shine, had rounded up some local villagers to act as models: "local people doing local things" as Steve Pemberton might describe it. I’m not quite sure the young lad who was playing the novice monk quite understood things, but the old ladies realised quite rapidly that they could earn money just sitting in the sun smoking cheroots, balancing baskets on their heads and so on, as long as they didn’t collapse into hysterics. Shine oversaw the whole thing, directing the action through a megaphone like a budding Steven Spielberg, and a great time was had on both sides.

The penultimate stop was the top of a temple facing into the sunset, and we got some great shots of the local architecture bathed in end of day light. Then it was on to our dinner appointment, which included a cabaret. After the dimly-lit fiasco of "Bhutan Culture Night", I had relatively low expectations, but it was brilliant. The dance moves and costumes were fairly traditional, but the well-lit stage and fairly modern "fusion" music certainly weren’t, and the better for it. I have some great shots and video. The pretty ladies and handsome young men performing traditional routines were fine, but I’m afraid the evening’s prize has to go to the elephant dance, performed by a couple of blokes (probably) in a pantomime elephant costume, to what can best be described as "hip hop". Hilarious, and almost worth the price of the trip on its own. 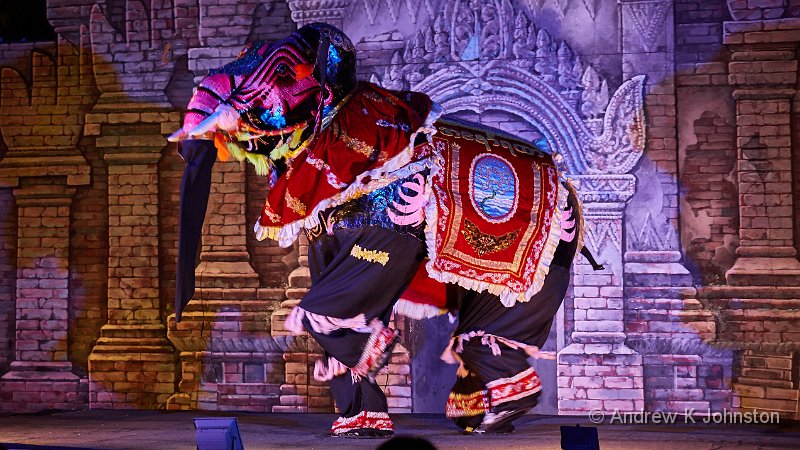 The only problem with today is that I don’t know how Clive, Phil and Shine can top it…

4 Responses to Brilliant Balloons, Terrific Temples, and a Hip-Hop Heffalump!