Andrew’s Gone to Iceland – and Not Just for Fish Fingers! 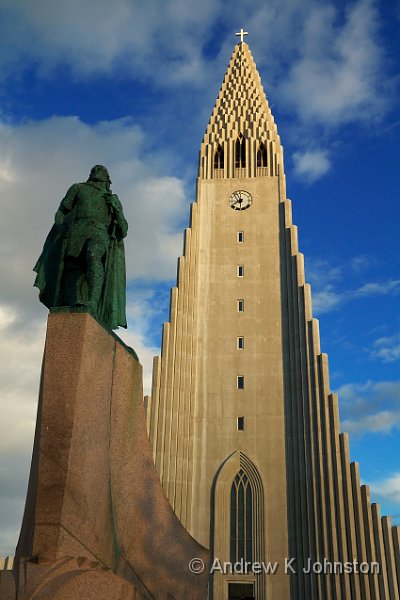 Well my Iceland trip has finally come round – I just hope it rewards the wait. As many of you will know I originally tried to do a trip to Iceland last year, but was stymied by a combination of volcanoes and economic uncertainty, which meant that there were insufficient other takers. This year things looked better, but it still took a couple of months of emails with the tour leaders before things were settled.

The waiting continued at the airport. The check-in and gate check processes were both interminable, with long queues which between them chewed up over an hour. Now it’s ten minutes past departure time, and I’ve just watched the baggage handlers unload a plane load of frozen fish from our hold, and only just start to load our baggage, one item at a time. I thought the aviation world discovered palletised baggage and freight about 40 years ago? I can see this flight running at least an hour late, and to think I rushed lunch because of the check-in delays…

I’m sitting in a plane with a seat pitch which makes Michael O’Leary’s plans to offer standing accommodation on Ryanair look half reasonable, and I’ve just scratched the back of my iPad quite badly on a very ill-designed “seat pocket” with near zero capacity and an exposed screw head just inside. Iceland Express is definitely at the EasyJet end of the scale.

At least I’m getting better at beating unreasonable baggage constraints, even if I did have to walk through check-in like John Wayne due to the lens down each trouser leg! Also I’ve discovered that if you can lift your camera bag with one finger they assume it’s light and don’t bother to check the weight. At last the weightlifting comes in useful.

… The flight was uneventful if a bit boring. There was no in-flight entertainment, and the noise levels were a bit too high to watch any video on my iPad. Oh well, thank goodness for Kindle and Angry Birds 🙂

The road from Keflavik to Reykjavik is flat and straight, with nothing much going on either side, but there are tantalising glimpses of more promising terrain in the distance. What is interesting is that you can see sunlight, cloud, dry weather and rain patches in the same vista. I see what they mean about waiting 5 minutes if you don’t like the weather here.

… Reykjavik looks a lot as I expected, clean and Scandinavian, although there’s almost a North East USA feel to some of the road and larger building layouts. After I settled in at the hotel I wandered down to the town centre, and got a couple of shots including this rather nice one of the Hallgrimskirkja and the statue of Lief Eriksson in front of it.

The daily cycle is going to challenge an early bird like myself. Sunset is after 9, and sunrise about 5. I was just starting to stir this morning and was rudely awoken by a party coming down the street, presumably having just been chucked out of a night club!

Oh well, I didn’t come here to rest. I have a free day in Reykjavik today, and the tour proper starts tomorrow. I’m going to try and update at least once a day – connectivity doesn’t seem to be a big challenge like it was in Cuba – so please check back soon.