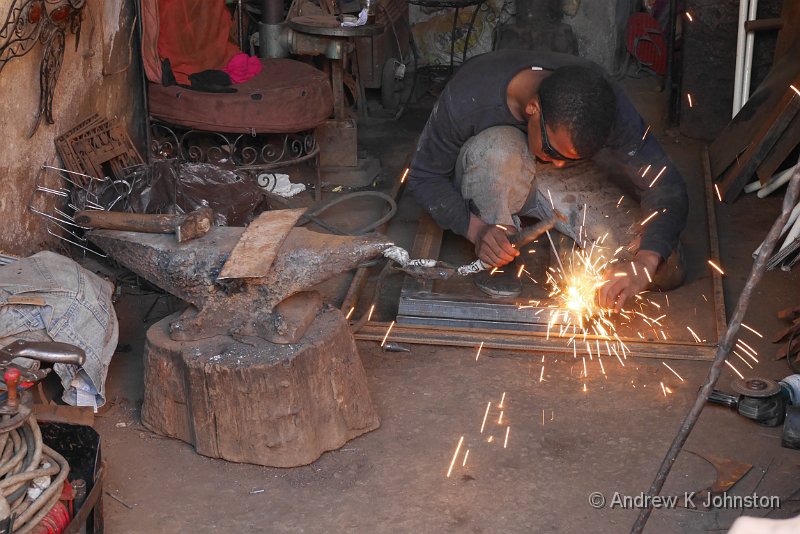 Here’s the list of the main kit I took to Morocco:

While I liked the flexibility of this selection, I would be the first to admit that it meant carrying more than ideal in terms of both weight and value. It’s also almost in danger of becoming my standard kit for any trip, which is vaguely ridiculous. However it’s not obvious how or even whether I should pare it down for a future similar trip.

Firstly, apart from the spare Micro Four Thirds normal zoom, each lens and all three bodies saw real use (although I could realistically have substituted either of the others for the only outing of the 550D and 17-85mm lens). However following my experiences in Cuba and Iceland I wouldn’t forego carrying a spare body for the “main” camera and a spare mid-range zoom, although by carrying two different “systems” I doubled up both elements on this trip.

I don’t think there’s a single shot I took with either Canon I couldn’t have taken with the GX7, but that might not have been true if there was more fast action, and I might have got one or two shots I missed if I had had the 7D with its fast performance and 6X standard zoom ready in my hand. The Canon lenses are definitely a bit more resistant to flare, but in most cases I didn’t find that an insuperable problem with the MFT kit. Whether the Panasonic batteries would have lasted the desert trip and frozen night shoots is an unknown, but the third party batteries for the Canon weren’t great either.

Conversely I definitely got several shots on the GX7 which exploited the GX7’s unobtrusive nature, silent operation, the wide aperture of the Olympus f/2 lens or the remarkable reach of my new 100-300mm lens. These I might not have got with the Canon.

As I’ve said before, the Panasonic GX7 is the ideal camera for wandering around in towns, or exploring cramped interiors like those of the older buildings in Morocco. I’ve read other reviews which liken it to a smaller Leica rangefinder, and if that’s true then I finally “get” the rangefinder aesthetic. Where it scores over other such cameras is that it is not limited to one mode, but moves seamlessly from point and shoot (composing on the rear display), or “twin lens reflex” (using the same panel tilted), through rangefinder and on to a high performance shooting mode best described as “mini DSLR”. I find myself increasingly using all those modes, whereas with my previous cameras live view has been only for situations where I genuinely can’t reach the viewfinder.

I also find myself using the multiple aspect ratios as a positive composition aid, and the live preview as a visual exposure guide in a way I have not done before.

The sheer physical size has an impact on subjects. In our financial argument with the snake charmers one of them went through our group saying “you have big camera, you have big camera…”. He got to me, raised his finger, and stopped dead. Something similar happened a couple of times.

Could I have managed with just the Canon kit? Probably, but I would have had to work harder, both physically and to get what I wanted from some of the subjects.

Could I have managed with just the Panasonic (with my GH2 as “spare body”)? Yes, but I would have been a lot more nervous about the desert trip. I happily sat on camel back with the 7D bouncing in the saddle. At one point I dropped the 7D in the sand from several feet up, but just dusted it off and carried on. That might have been a more serious incident with the smaller cameras.

The solution might be to extend my micro four thirds kit with a weatherproof lens and body, such as the Panasonic GH3 and 12-35mm lens. Morocco wasn’t that hard on kit, although I didn’t know this beforehand, and that pairing would have managed fine in the desert.

Unfortunately the harshness of a location is something which is hard to predict on a first visit: Iceland was much harder on equipment and even some of my heavyweight Canon gear did not survive – the wear on smaller cameras would probably have been unacceptable.

The alternative view (although it’s from Kirk Tuck, a man who changes his cameras almost as often as I change my socks) is that we just accept that the cost of smaller, lighter kit is that we wear it out more quickly, and that this fits with the gradual obsolescence due to technical advances. While I partly buy this argument, I’m not keen to completely wreck and write off equipment, and it brings the risk of a trip where both the primary and spare equipment die before the end. That would be a real disaster.

So for now I have moved one step closer to travelling light (or at least light-er). For trips to “easy” destinations I may be prepared to go MFT-only. For more physically challenging locations, if there will be a lot of fast action, or if I need the visual impact of a “big” camera I take the Canons. For trips with a mix of both, I remain a beast of burden.