To BD or Not to BD

Should I buy the Blu-Ray?

So you have a collection of several hundred DVDs, you’ve finally managed to remove almost every VHS tape from the house, and you’ve bought a shiny new TV and disk player. Which, if any, of you existing disks should you replace with new versions, and which versions should you buy?

We have a large video collection, and we’ve already owned several versions of some titles, maybe a couple of different tapes or different DVD releases. Replacing some of our existing disks might make sense, but we really don’t want to do it wholesale when we’ve already got "good" copies of a lot of stuff. Our experience is that there are cases where the cost of replacement is fully justified, and others where it is just a waste of money. I thought it might be useful to try and distil that experience into some guidelines for others in the same predicament.

This does assume that you like "big" films, or the best output of National Geographic and the BBC Wildlife Unit. If fluffy romantic comedies are your thing, or you like budget arthouse movies, then this may not apply. That’s also the case if you don’t like 3D, or your system doesn’t support it (ditto 4K). Please modify this advice accordingly.

The first thing to say is that if you have a "good" DVD of a film or TV series made after about 1995, and it’s not covered by one of the following special cases, then there’s limited benefit to replacing your DVD with the equivalent Blu-Ray. If your disk player does a good job of "upscaling" to HD, or even 4K, then the change will be marginal and you will wonder why you spent that money. If your disk player does not play recent high-quality DVDs well, then your money is better spent on getting a better one.

A lot of my DVDs, even for big blockbuster films, are fine based on the previous advice, and aren’t going anywhere. However there are exceptions. These tend to be films from the 1980s and 1990s which were released on VHS and then pushed to DVD using the same digital version, and while the quality was adequate for viewing in the early 2000s, it shows up really badly on newer kit. Grainy/noisy video and inaudible sound are common problems. The dead give-away is when your DVD player produces a half-sized picture in the middle of the screen, suggesting that the video isn’t even full DVD resolution.

This is true of my DVDs of some quite major films, including Robin Hood Prince of Thieves and Tremors. Buy the Blu-Ray, but look for some evidence like the word "remastered" which suggests that they went back to the film and re-processed it (and didn’t just push the same awful video onto a Blu-Ray). For some favourites the improvement will blow you away, but even in more marginal cases you will be at least less frustrated.

There is an obvious consideration about the quality of the source material. If it was recorded on 1980s videotape there’s a limit to what can be achieved. Sadly, the DVD of Edge of Darkness (the TV masterpiece) is about as good as that’s going to get, but I will be very happy and first in the queue if someone can prove me wrong.

Where the source material does support it, which is true of a lot of classic films made in the 1960s and 1970s (and some earlier ones), there’s the option of a frame-by-frame restoration to the highest possible modern video and sound standard. The British Film Institute has done this for favourites such as The Italian Job, Zulu and most of David Lean’s films. MGM/Eon has done it for all the Bond films.

The results, on Blu-Ray, can be absolutely stunning. It’s like a 2010s film crew was transported back and filmed the same performances on modern kit.

In Zulu you can see every barb of every feather on the Zulus’ clothing, and you can see that because Chard and Bromhead were from different regiments, there’s a little piece of dark green trim on one tunic which is dark blue on the other. In The Italian Job you can read the badges on the cars and motorbikes. The night-time scenes in From Russia with Love are no longer muddy brown, but sharp blacks in Istanbul, and with a lovely pre-dawn blue glow on the Yugoslavian border. You can admire the couture workmanship on the Bond girls’ dresses. I could go on.

It’s literally like watching a new film. You’ll see so much you didn’t before.

In fairness, it’s the remastering which makes the difference as much as the disk format. Before we bought the Bond Blu-Ray collection we had a DVD of Goldfinger which was based on the remastered version, and that delivered much of the same benefit, but if you haven’t invested in those intermediate versions then the Blu-Ray is even better.

We love 3D, even if sadly the entertainment industry has fallen out of love with it again, and the availability of support in new kit and new film releases is reducing. If you like it, and your system supports it, and there’s a 3D Blu Ray of a film you have on DVD, get the 3D disk. The video and sound quality will be better, and you’ll enjoy the literal extra dimension to the work.

A small and select but wonderful set of films have been subject to the best of both worlds, remastering the video, but also retrospectively putting them into 3D. The primary examples are Titanic, Jurassic Park, Predator and Terminator 2: Judgement Day, but there are a few others. Like the remastered 60s films, it’s a whole new level of enjoyment. Highly recommended, even if like me, you have probably purchased each of these films in about 4 different previous versions. While industry trends and costs mean there may not be too many more films given this treatment, the fact that the 3D version of T2 was released just before Christmas 2017 does mean that we shouldn’t give up hope.

As part of the shift away from 3D, the industry is pushing 4K / UltraHD. (This has twice the resolution of normal Blu-Rays and HD TV, at 2160 pixels vertically.) In addition to 4K versions of new blockbusters, there are some "4K remasters" of big films from the last 20 years. However I’m much less convinced about these.

First, if you have normal eyes, ears and equipment, 4K really isn’t the vast improvement over standard HD Blu-Ray that the hype claims. Part of this is just simple diminishing returns as the picture resolution increases beyond what we can easily distinguish. There’s a very good chart on this at http://carltonbale.com/1080p-does-matter/, reproduced below: 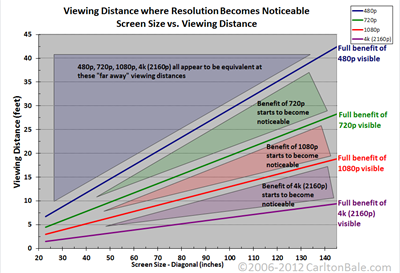 What this boils down to is that unless you are viewing 4K on a 60" screen from about 5′ (1.5m), you’re not going to notice much difference from HD, and in practice, that’s far too close to view a screen of that size. We view our 58" screen from about 8′, which is probably still a bit too close, and I can just about see a difference in normal viewing. Obviously if you’re a 20 year old bird spotter things might be different… 4K is great for a cinema, limited value for a telly.

However, there are also a couple of more insidious problems. Some of the conversions are significantly "overdone" – pushing the contrast to extremes which don’t match the material. The Mummy (the 1999 Stephen Sommers film) is a good example, where the 4K version is a riot of shiny highlights and pitch black shadows, while the Blu-Ray retains the beautiful look of the original film. In addition, many 4K remasters end up with a grainy look which the BD version avoids.

While some of this might be down to my eyes, or my kit, I’ve heard similar complaints elsewhere, including from a couple of guys who run a TV/HiFi shop and whose job is to set up high quality demo systems.

Personally I’m probably going to keep 4K for new blockbusters without a 3D version. If a favourite gets an anniversary 4K makeover I may buy the 4K/BD combo, but I could easily end up watching the Blu-Ray.

What about it? It’s a great way to get instant access to material you won’t want to view over and over, and where picture quality is not the key requirement: catching up on box sets is a great example. However if you want quality then streaming is currently still inferior to broadcast HD, which is in turn inferior to a disk, even a good DVD (your mileage may vary…). Don’t throw your disks away yet!

For new purchases, buy at least a Blu-Ray version, and consider the 3D or 4K version if there is one. If the old DVD version isn’t great, and there’s a remastered version on Blu-Ray, then it’s worth an upgrade. However if your existing DVD version is a good one, save your money and buy yourself some new films and shows instead.