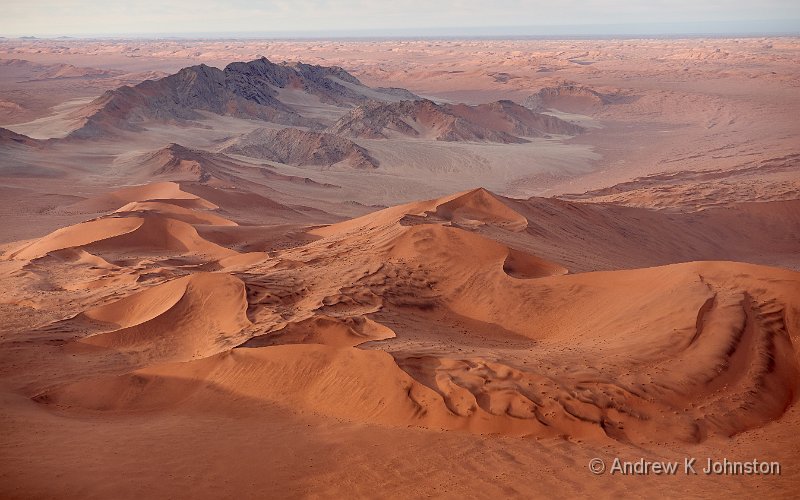 Up at 4.14, but in a very worth cause, our helicopter flight over the Namibian dunes. We had to take it in turns, as the company only have one helicopter with three passenger seats flying at this time of year, so I volunteered to go first along with Alison and John. We were met at the park gates by the pilot, a big South African called Pierre. After the usual necessity of signing one’s life away, he drove us out to the chopper, which turned out to be dramatically smaller than the last one I flew in, many years ago in Barbados.

Called a Raven II, this is a great sight-seeing device, with a clear bubble canopy, plus in honour of the photographic trip they had removed the doors, giving us each a wide view to the side, plus I could also shoot through the canopy to the front. It was fitted with harnesses very similar to standard car seat belts, but at least Frances’ fear that I would be left with two odd ends like Sam Neill in Jurassic Park was unfounded.

I have to confess that the first minute or so of the flight was a bit disconcerting, in that such a small craft has to tilt down quite sharply to build up speed, when you are still fairly low to the ground. However things quickly stabilised and we were humming along down the Sossusvlei Valley. We were initially battling poor light, but our luck held and the sun came out exactly when required, when we were turning over Deadvlei and Sossusvlei. However the slow appearance of the sun meant I got some very rare shots of the hills behind the dunes wreathed in cloud and mist – Pierre reckons he only sees anything other than straight sunshine about 8 days a year.

We then flew deeper into the dunes, and back to the airfield via some meadows with oryx, ostriches and jackals. These were trickier to photograph, but I did get one great shot of the oryx.

We were back at the hotel by 8am, just in time for breakfast, and had a great lazy morning before the rest of the group arrived back.

For the afternoon shoot we were meant to all go back to Deadvlei, but there was a problem with the booking for the 4×4 required to take us through the last 4km of sand track from the bus stop, and we had to re-plan. We spent the rest of the afternoon shooting dunes and trees along the road back to the hotel.

Another early start tomorrow – our turn to go to Deadvlei.

If you’re going to do a “doors off” helicopter flight then the physical size of your equipment matters (ooh er missus 🙂 ). Smaller is definitely better. I got great results with my Panasonic G9 and the 35-100mm lens (70-200mm equivalent). Another group member shooting with the equivalent Olympus kit was also fine. However those shooting with the big Canons and Nikons and 70-200 or 70-300 lenses were finding great difficulty getting sharp images. The dual stabilisation of the Micro Four Thirds cameras helps, but the biggest contributor seems to be the fact that the big lenses project out of the cockpit into the slipstream, and the wind-shear on them makes them very difficult to hold still.

I also had the Panasonic GX8 with the 12-35mm lens for wider shots, and I was able to have both on the floor in front of me and switch between them. That arrangement also worked well, but would be tricky with physically larger cameras.