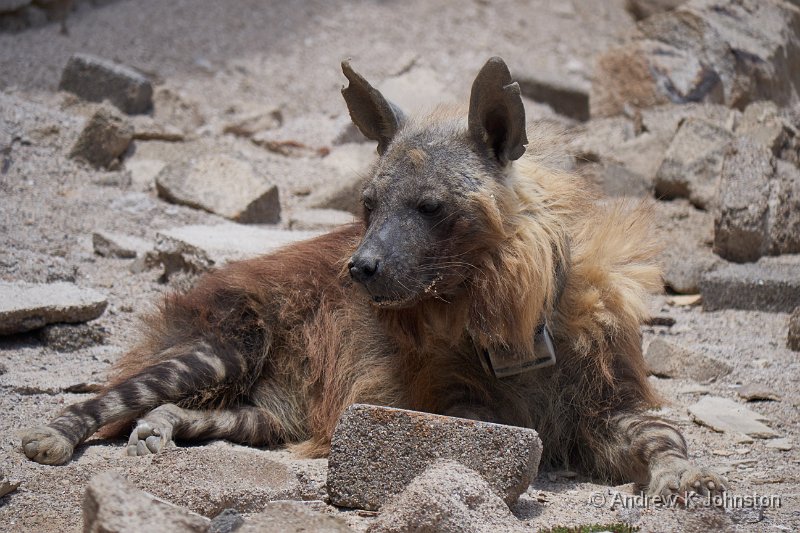 Today we visited two ghost towns based around diamond mines. In the morning we visited Elizabeth Bay, which is about half an hour from Lüderitz behind a substantial security screen as it shares its location and access road with an active diamond mine.

Elizabeth Bay is quite obviously an industrial site supported by worker accommodation and facilities, even though it is right next to the sea. The location is because diamond-rich sand was dropped as rivers reached the sea, and diamonds could be collected simply by washing and sieving the right seams of sand.

The town is in an advanced state of decay despite only having been abandoned in 1951 because the seaward bricks of each building are simply disintegrating under the onslaught of wind and salt spray, and then buildings collapse in turn.

The highlight for me was an encounter with a brown hyena. These shy and almost (by hyena standards, anyway) cute animals are endangered, and only about 2500 live on the Namibian coast. Some live near Elizabeth Bay, and when we arrived we met a BBC team who are making a documentary about them, using camera traps in the buildings.

Anyway, during my explorations I came face to face, on three occasions, with one hyena, who was completely unfazed and quite happy to be photographed. Our guide confirmed she is an elderly female known as Obelixa, who is habituated to humans, but it was still a fascinating encounter with a quiet, rare creature.

In the afternoon we explored Kolmanskoppe, which is much closer to Lüderitz, and a more straightforward tourist location. This is the source of another set of iconic Namibian images, abandoned mining buildings filled with sand. We had several hours to just wander and photograph at will. However it was quite hard work due to the constant strong wind and biting sand. At one point the eye sensor of my camera got so clogged it stopped working. 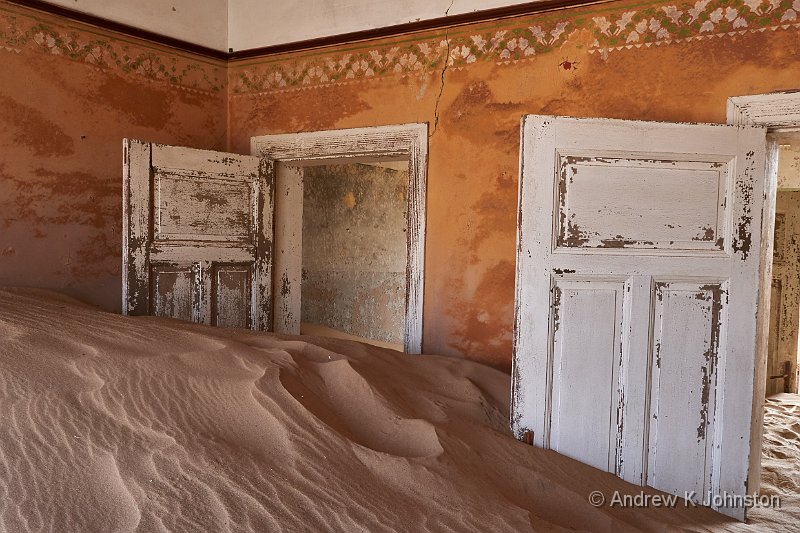 While the fabric of most buildings at Kolmanskoppe is in better condition than at Elizabeth Bay, what seems to happen is any which is not actively maintained eventually loses a window or part of the roof to the onslaught, and then the sand rapidly pours in.

The sands around Kolmanskoppe may be a bit worse, but generally sand is a recurring theme of this trip. Just outside Kolmanskoppe there’s a road sign which says "sand". Without any loss of accuracy the Namibians could just put this outside the airport and have done with it.

Hopefully we will shortly be back at the hotel for a shower. Tomorrow I want to photograph Lüderitz, which is a pretty town, and not completely full of sand!