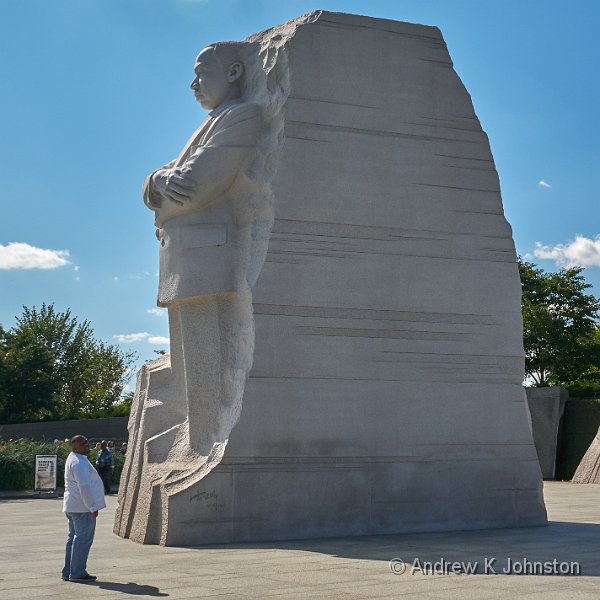 A rubbish night’s sleep. Between stupid pillows (of which more later), shouting drunks in the street, private cars beeping horns and the local emergency services insisting on using full sirens and horns throughout the small hours neither of us do very well. Frances is seriously considering shooting the paper seller outside. And apparently I snored, but I’m sure that’s not true.

Morning brings more peaceful conditions, although there’s still a drunk guy shouting for "Liam". After breakfast we move off to explore DC. Our first stop is the National Archives, which have been a target since we saw National Treasure. The display of the American Declaration of Independence etc. is just as good as expected. After that we browse a fascinating display of documents with interesting signatures, such as Einstein’s letter to Roosevelt about The Bomb, or Duke Ellington’s draft card.

Over coffee we watch a motorcade go past. Frances is sure Obama is in the limo, but I can’t be certain. Given the ambulance and fire engine following up his presence seems likely.

The main part of the day is spent wandering around the Washington Mall and the various memorials to key presidents and others. The new WW2 memorial is an impressive surprise, as is the way the space is clearly being used as an active park as well as a tourist centre. We’re entertained by a group of young blacks taking "glamour" photographs at the memorial to Martin Luther King, but mainly just impressed by the scope of memorials. We finish up by trying to view the White House, but for reasons unexplained the Secret Service decide to clear all onlookers out of the public areas just at the wrong time. However we do end up having coffee at The Willard Hotel where King finished his "I have a dream" speech.

We finally get back to the hotel very foot sore. Frances has read an article which suggests that genuine exhaustion is not uncommon among visitors to Washington as it’s easy to do more miles than you think. We may not be quite that bad, but ankles and knees are certainly complaining a bit. However overall it’s been an excellent day.