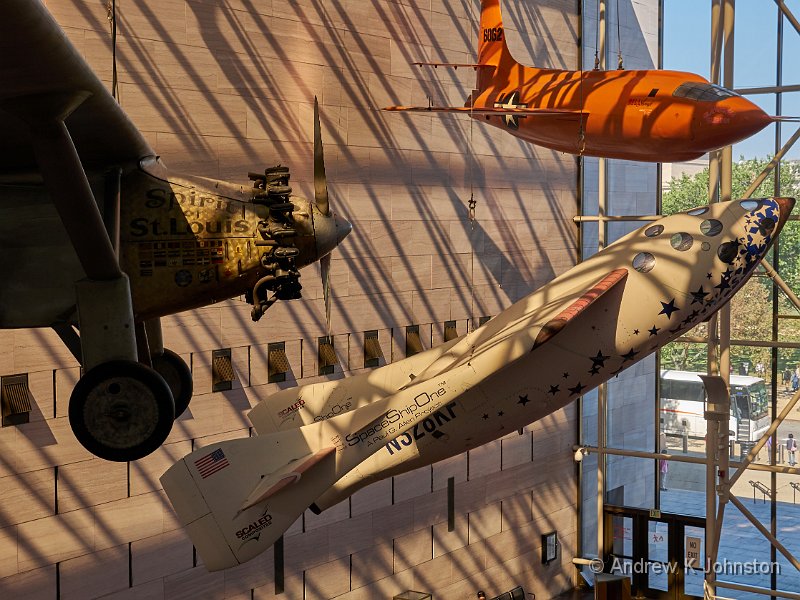 A much better night’s sleep. Washingtonians obviously follow the "Saturday Night’s Alright For Fighting" rule, and cause less trouble on other nights. I’ve also developed a hybrid bath towel and pillow scheme which fares rather better in the head supporting department. Frances resorts to cotton wool in the ears.

Breakfast is taken at a rather unique institution across the road from our hotel, which appears to be a 24 hour political bookshop and cafe. I suppose if such is going to exist anywhere in the world, an area which houses many young people associated with the US administration is a good bet, but we certainly haven’t seen one before.

First stop after breakfast is the obligatory shot of the White House. Today there is almost no visible security activity and we are among a total of about 6 people at the fence. Much easier.

The bulk of the day is spent exploring the National Space and Flight Museum. It’s great seeing such iconic vehicles as the actual Apollo 11 command module, and we get the weight off our feet with a couple of excellent Imax films about astronomy.

We then pop over the road to the Museum of the Native American. This is rather less inspiring, reminding us of some rather less impressive American behaviour, but still interesting.

We finish up back at the bookshop. Oh well…

First order of business is a tour of The Pentagon. This is mainly walking around a very large office building sandwiched between two very smartly dressed military men. In our case the lead is a young sailor who swears he’s over 6ft tall but we’re not convinced. However he certainly has the trick of walking backwards for an hour spouting a string of interesting nuggets and funny stories about the American military and their history.

For the afternoon we go to the Newseum, a museum dedicated to the news media. This substantial establishment deals with all aspects of the news media, including the history, ethics, risks and challenges of getting news to the people over the years. Historic papers go back to the 1500s. Static displays include items such as the antenna from the top of one of the Twin Towers, then used by all the New York media. More interactive displays include a fascinating quiz on how to handle the most challenging ethical publishing dilemmas. I even manage to buy a singlet with the slogan "Exercisin’ my right to bare arms"! Although squeezed into a few hours at the end, this is in some ways one of the highlights of our visit to Washington.

Our journey back takes in the third Washington airport at Baltimore, and uses train, plane, automobile and bus. However everything goes smoothly, and we’re home ahead of schedule.

What Worked And What Didn’t

This was my first trip with just the Panasonic cameras, and they appear to be an excellent solution. The GH4 combined with the two f/2.8 zooms is a first class kit which handles pretty well, although I’m still getting used to some of the button positioning, and I don’t have to worry about the odd bump or drop of rain. However it matches 2.5kg of Canon or Nikon kit while weighing less than a 550D and single lens. Around town I switch to the GX7 and the power zooms which lose little in capability and are so light I have to occasionally check they are still there.

The infrared-converted Panasonic GF3 seems to have produced some very interesting results from the rising clouds and running water of the Smoky Mountains, and the main cameras continue to surprise and delight in unexpected ways. It looks like the GH4 is designed to hunt for focus through each "plane" of a scene in turn, so if you just hold the camera steady and keep refocusing you should be able to capture all the shots required for focus blending. We’ll see how well this has worked in practice.

This entry was posted in Photography, USA 2014. Bookmark the permalink.