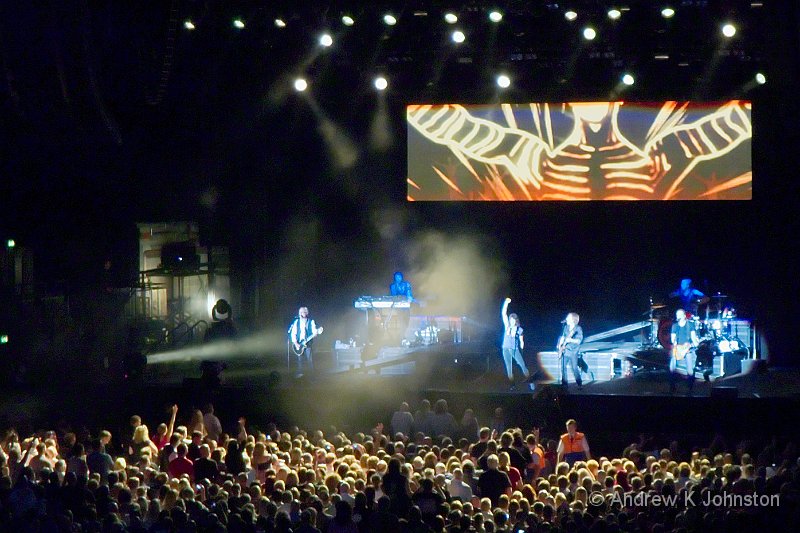 A few weeks ago I attended a concert bringing together three classic American rock bands: Journey, Foreigner and Styx. It was not a bad evening’s entertainment, but left me with mixed feelings and musing on what makes for great live music.

The venue was Wembley Arena. It’s not our favourite venue by a long chalk. The main problem is that it’s long and thin and most of the audience are facing at right angles to a proper view of the stage. It also seems to suffer much worse than other venues from “fidgety audience syndrome” – I’m not sure whether this is related to the layout or not. What I do know is that watching a concert at Wembley is a constant battle with people coming and going to the bars and WCs, with no vestige of consideration for those actually trying to enjoy the show. This time people in the row behind us chose the middle of “Cold as Ice” to have an argument about tickets – surely they could have enjoyed the number from the side and then sorted things out?

I hadn’t really appreciated the relative ranking of the bands, so was a bit surprised when Styx led off the show, very much as the junior band working on a thin strip at the front of the stage. Another surprise was the musical style, prog rock rather like an American Yes, whereas I went in thinking of the ballads like “Babe” and Dirk DeYoung’s solo work. Even if it wasn’t quite what I expected, the performances were solid and varied enough to hold our interest. While musically I had no complaints, I was really annoyed by a bright light shining straight into my face from head level on the left of the stage, which made photography or even concentrating on the performance a real challenge.

Foreigner were simply superb. They played all their hits, the sound quality was good, the lead singer interacted well with the audience, and we even had a sing-along to “Feels Like the First Time”. The lighting effects were excellent and the band moved around using the stage and each other very effectively. Plus that stupid bloody light had been reset sensibly! This was more like it, and I was sad their set only lasted about an hour.

After Foreigner there was a big gap, well over half an hour, as the stage was completely stripped and re-set for Journey, behaving very much as the headline act courtesy of the renewed success of “Don’t Stop Believing”. When the show finally restarted the opening was very promising, with a thundering number and the voice of the energetic young vocalist soaring overhead.

The trouble is, that was it. 3/4 of an hour in I was getting tired of thundering numbers with high pitched vocals. I can’t tell you what they played, because I couldn’t distinguish one song from another. Normally even if I’m not familiar with a band’s catalogue, I could describe “the acapella one” or “the one with the great drum solo”. Nope.

There’s a musical joke on Deep Purple’s “Made in Japan”, where Ian Gillan asks the sound man for “a bit more monitor if you’ve got it”, and behind him Glover or Blackmore shouts “yeah, we’d like everything louder than everything else!” The trouble is that Journey and their sound team didn’t understand this was a joke…

Add to that virtually no interaction with the audience, and the lighting guy now shining the whole bank of lights in our eyes at regular intervals, and Journey just didn’t work. We gave up and left before the end of the show.

As a seasoned concert attendee, I’ve long realised that the success of a band has very little to do with the excellence of their live performances. It’s just frustrating to see the headline act do something so badly, when the acts further down the bill are so good.

Next: four US rock bands in three weeks. How did Toto compare?