It Now Costs a Pound to Spend a Penny! 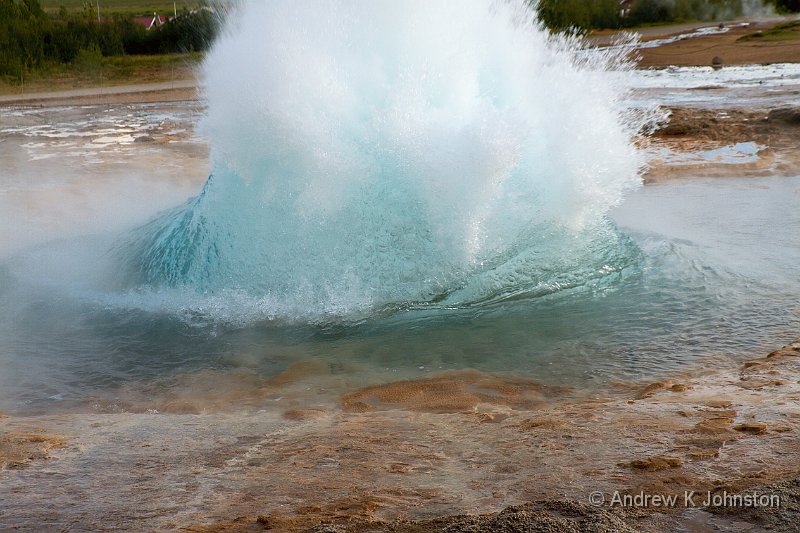 Just a quick update today, as I’ve had a few computer problems and time is tight…

Yesterday we were picked up from the hotel in two enormous “superjeeps”, which started life as Nissan Patrols but now stand about 10ft tall, and headed out into the country. The day’s itinery focused on the well-known natural sites within a day from Reykjavik, so we started (via a trip over the mountains to see a geothermal power plant) with Thingvellir, which has both historic interest, as the site of Iceland’s parliament from the 10th century until the 19th, and also geological interest, because it’s where you can most visibly see the North American tectonic plate moving away from the Eurasian plate, at about 1cm/year.

After that we travelled up to the big waterfalls at Gulfoss. I decided to try and get a close-up, which meant descending into a large cloud of spray, but thanks to my Kata Rainbag for the camera, and an excellent North Face raincoat I’d picked up in Reykjavik, both camera and I stayed adequately dry, and I got some good shots. They need a bit of work to bring out the best, but hopefully I’ll post one before the end of the trip.

After that we took the scenic (i.e. dirt track) route back to Geysir, which gives its name to powerful host springs in languages the world over except, ironically, Icelandic! Actually this is a little disappointing if you’ve been to larger sites such as Yellowstone, but it’s well worth seeing if you’re here… We wandered up the path to the main geysir, Strokkur, and waited. Suddenly this dome appeared, and the geysir erupted. And guess who was standing in exactly the wrong place? No raincoat, no rain bag – I got absolutely soaked. Fortunately I managed to turn quickly enough so that I took most of it on my back, and no harm was done. When I realised what was happening I was immediately worried that I might be scalded, but the temperature was fine, like taking a nice warm shower with your clothes on. Well at least the shot was worth it.

If you’re puzzled by the title of this piece, let me explain… Before I came away I was reading my mother’s journal from her Iceland trip, in the early 90s. At that time none of these sites had any significant development for tourism, and she remarked several times how unspoilt and un-commercial they were. That  has changed. You can still visit the attractions free of charge, although I suspect the paths and car parks are a bit more obtrusive than when my parents came, but you are also encouraged to visit the visitor centre / restaurant / shop and, of course, use the facilities should you need to do so. At Geysir and Gulfoss these were free of charge, but at Thingvellir they were extracting a punitive 200 ISK (about £1.10) for the privilege. Adam, the other British person on the trip, looked at me and we both said almost simultaneously “that’s a pound to spend a penny”*. Blank stares from those with other financial contexts. Oh well.

* Explanation for the foreign, the young and the hard of thinking: before Britain changed to decimal coinage in 1971 the standard charge for a public toilet had been, for many years, one old penny, 1d. “Spending a penny” was a convenient and common euphamism. The expression still works, although mainly as a measure of long-term inflation.