Here are a couple more of my shots from the Tutankhamun exhibition. The sarcophagus is a particular delight, as the full-sized items did not travel from Egypt, but this 6" version did. In real life it’s tiny – if you look carefully you can see a pin to the left of the belt â€“ that’s a normal mounting pin, not a bolt! So I have a picture of the sarcophagus, almost as if we’d seen the real thing.

I’m very pleased with this image. It was taken at f/4 and ISO 2000, through glass but from only about a foot away. Depth of field was a significant challenge, but I cheated slightly by putting the result through Topaz Sharpen AI in focus mode. The result is sharp in most areas, although the top of the headgear and tip of the beard are still slightly out. Noise wasn’t really a problem, although Topaz did clean it up slightly.

However this is mainly a testament to the Sony RX100, rather than post-processing. It may be the size of a packet of cigarettes, but it’s capable of images just as good as an interchangeable-lens camera ten times its size and weight. It’s not a "point and shoot" compact camera, it’s a big camera made small. However small doesn’t mean cheap, even this five year old variant costs over Â£500 if you find someone who still has new stock. The latest variant costs almost as much as a top-end Micro Four Thirds camera or mid-range DSLR. 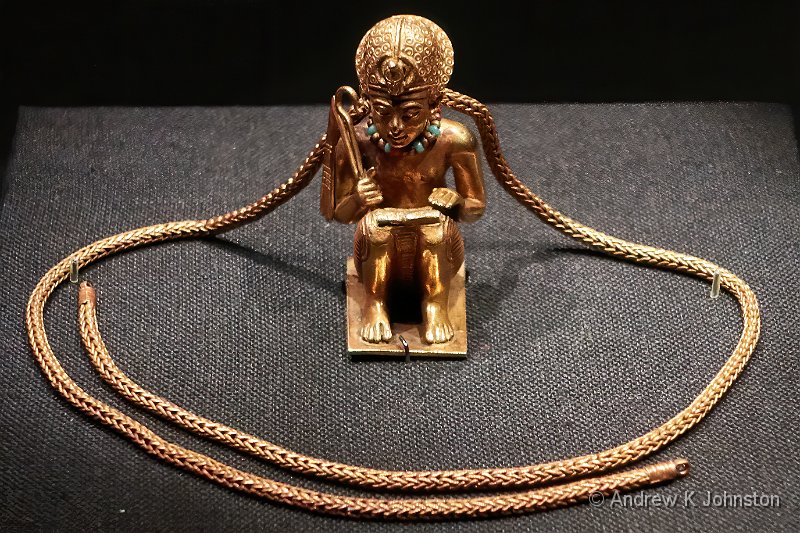 But that’s absolutely right. Making tiny things which are just as good as the full-sized versions is hard, takes a lot of work, and demands arguably even more skill. I would hope the Pharaoh’s advisors accepted that when they commissioned a jeweller and a miniature artist to make these items. It’s equally true today.