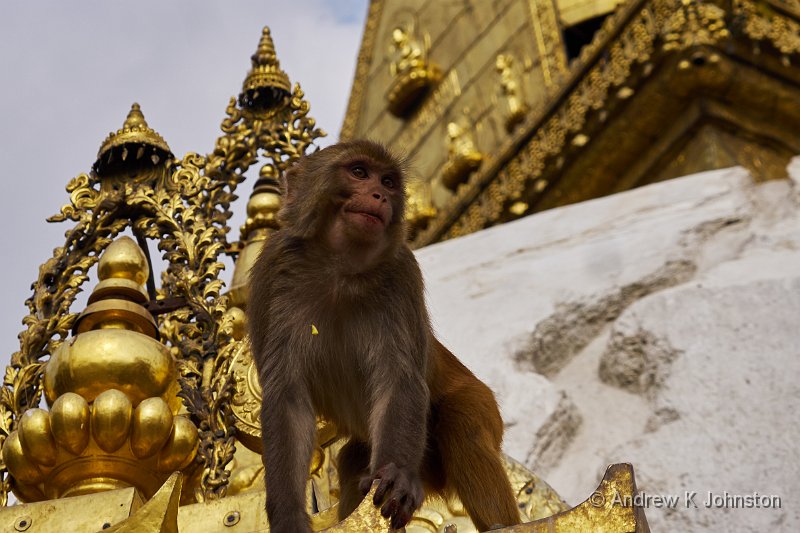 We have an early start to our return journey, bidding farewell to Bhutan in the dark. The flight back to Kathmandu is eventless, except for a slight argument about which mountain is Everest! Between somewhat poorer viewing conditions, an unfamiliar angle and a slightly ambiguous announcement by the captain we’re not sure which is which. I’m glad I got my shot on the way out.

In contrast to the rugby scrum of arrival at the start of the trip, we have Kathmandu airport almost to ourselves and formalities are discharged very quickly. The calm before the storm.

Kathmandu is a real shock to the system after the calm and emptiness of Bhutan. It’s a manic, buzzing place, and that’s in current depressed conditions. Not only are they are trying to recover from the earthquakes in April and May, they are also battling a blockade on the Indian border which is starving them of fuel and really depressing the economy. We see several long queues for petrol, and they have taken to riding on the roofs of buses, because there isn’t enough fuel to run all the normal services. There’s a pall of smoke over the city because they’ve had to start burning wood for heating and cooking after not normally doing so for years. The issue is an internal wrangle over the new constitution, which the Indian-facing group in the south think reduces their power, but it’s killing the country’s economy, blocking large amounts of foreign aid targeted at the earthquake victims, and could easily lead the Nepali government into alliance with China, extending that country’s influence south of the Himalayan backbone. None of this is good…

After a gentle morning in our hotel, we take a short guided tour after lunch. The tour takes in the holy area at the top of the hill where the main shrines are, but which is now also heavily populated with people trying to sell you handicrafts (think Montmarte, but times about 5). We then visit the squares in the centre of town where various old temple and palace buildings were very badly damaged in the earthquake.

Just a couple of months ago I read in National Geographic about the Nepali Hindu tradition of the "Kumari". Essentially this sect select a pretty young girl of about 6 and present her as a living deity, until the point where she enters puberty when she retires and another one takes over. We reach the House of the Kumari at the right time and are treated to a short view of regal-looking young lady looking down from an upstairs window. The NG article explained how it’s regarded as a great honour and selection is quite competitive, but the girls sometimes find it hard going returning to normal life in their teens. It’s a bit of a weird practice, but it was interesting to see something I’d only just read about.

Even in the current conditions Kathmandu is a noisy, manic and dusty place, and I’m not sure how I would cope at peak activity. I’m glad that having come here we’ve seen a bit of the city, but I wouldn’t want to spend much time here or hurry back.

To settle my knees at the end of the day I run myself a bath. The only slight problem is that what is otherwise a very posh hotel has distinctly yellow tap-water. Oh well – I’m not going to drink it!