Today we have another long-awaited organised tour: Pearl Harbor. Preparations are complicated by an additional security directive since we tried to arrange the same trip in 2016 – you are allowed no bags of any form, quite a challenge if you’re going to be out all day and one of you is not big into pockets.

Frances does have one pair of pink trousers with pockets, and is busy stuffing them when there is a loud cry of pain. We discover that the rear pockets are partially closed with dressmaking pins, from a previous start to removing the pockets altogether. Hoist by her own petard, I think they call that.

An aside: this is yet another arguably pointless example of American “security by theatre”. At no point in the day are we closer to the operational parts of Pearl than the range of a very high-powered rifle. We interact mainly with Park Service rather than Naval personnel, and at no point does anyone X Ray us, pat us down or ask us to disclose the contents of our pockets, so it’s hard to see why a small camera bag or purse would be such a risk.

Our taxi from the hotel arrives bang on time, vindicating the hotel staff, but the driver then announces that he has only been on the job a few days… Why is there only one city in the world which regards “taxi driver” as a qualified profession? However thanks to our previous reconnaissance we get promptly to the pick up point and meet our tour. The same cannot be said for another couple, who get completely lost in the mall and have to be collected later.

The tour’s first stop is the USS Missouri. I have been fascinated by this ship’s story since we first saw Under Siege. She saw active service in WWII, including the Japanese surrender, was brought out of mothballs in the 80s and ended up firing the opening shots of the Gulf War, an event which is nicely echoed in the film.

Another aside: there are only two significant female characters in the film. Both play themselves – “Mighty Mo” of course (although her sister the USS Alabama did most of the “static” work), and Erika Eleniak, who really was Miss July ’89.

The tour of the Missouri is excellent. We are broadly familiar with the military history, but get a lot more detail about the formal end of the War. Mcarthur’s speech from the surrender ceremony still rings today:

Today the guns are silent. A great tragedy has ended. A great victory has been won. The skies no longer rain death — the seas bear only commerce men everywhere walk upright in the sunlight. The entire world is quietly at peace. The holy mission has been completed. And in reporting this to you, the people, I speak for the thousands of silent lips, forever stilled among the jungles and the beaches and in the deep waters of the Pacific which marked the way. I speak for the unnamed brave millions homeward bound to take up the challenge of that future which they did so much to salvage from the brink of disaster.

We were not, however, aware that the Missouri survived a Kami Kaze strike. The ship and crew were very lucky – the bomb and much of the plane went to the bottom, leaving a small fire, a large dent in the deck edge still visible today, and no American casualties. When they were cleaning up they recovered the pilot’s body, and the Captain insisted he be given a military burial at sea, complete with a rapidly stitched together Rising Sun flag. Treat others as you would wish to be treated.

Lunch includes a whirlwind visit to the aviation museum, and then the afternoon is dedicated to visiting museums about the Pearl Harbor attack, and finally the USS Arizona which lies in the harbour with over 800 sailors and marines “eternally at their post”. 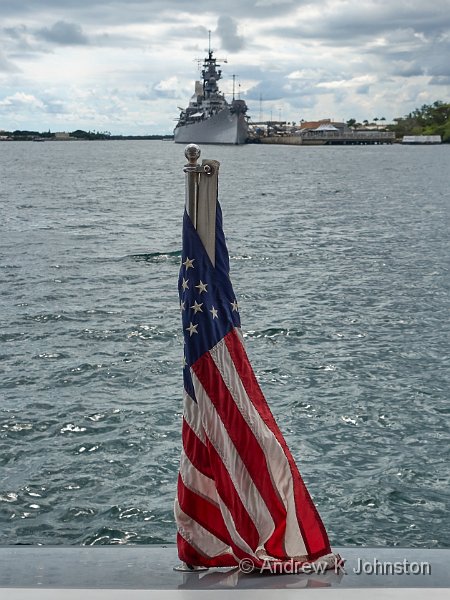 While the day has been hot and sunny so far, on the ferry to the Arizona we watch rainclouds literally spilling over the ridges behind Honolulu and by the time we are back on the bus it’s tipping with rain.

The Call to Duty tour by Hoku has run like clockwork, no waiting in line, tickets and provisions handed to us exactly when needed, and Mark, our driver, is friendly, professional and very knowledgeable.

The last stage of the trip is a drive-by tour of the military cemetery in a small extinct volcanic caldera, and a number of Honolulu landmarks, although sadly the weather impinges somewhat on visibility.

We leave the bus in the centre of Waikiki to have a look at the posh hotels and shops. We know we’re in trouble when we go into the loos in one of the malls, and the seats have a control panel! Frances had a hot seat, but dared not try any adjustments.

Dinner is in a nice restaurant above one of the malls. Very pleasant, but essentially the same meal as the previous night costs twice as much.

This entry was posted in Hawaii Travel Blog, Photography, Thoughts on the World, Travel. Bookmark the permalink.